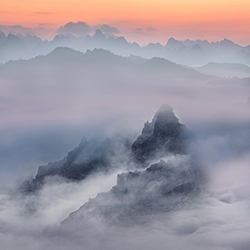 For years, Morgen Wurde has been creating cinematic soundscapes that are dark yet romantic and reminiscent of the forces of nature, which appear to humanity in many ways, sometimes calm, majestic and engaging, sometimes unaffected, threatening and repellent. After all, the music of the Kiel-based artist always revolves around existential emotions in the face of the unfathomable wonder of existence. Intense psychedelic soundscapes also characterize the sound of Tis whose tracks exude an incessant drive through unstoppable minimal yet deep techno grooves. The work of the Hamburg-based artist has taken on epic proportions under various project names featured on his own labels, formerly Verform Records and now Roo Records. The mysticism and stoicism of these approaches find expression on their joint EP „Zeitigt“. Embedded in atmospherically dense deep minimal techno beats, sublime acoustic sounds from two further artists give this EP its signature sound: elegiac vocals by Maria Estrella Aggabao and haunting violin playing by Georges-Emmanuel Schneider. The voice of Las Vegas-based Maria Estrella is enthroned here as an ethereal angelic instance, animating „Sinkt“ and „Birgt“ with their emphatic mood. In his work, violinist Georges-Emmanuel Schneider wanders between free improvisation, modern and contemporary classical music, he also likes to create genre-bending sounds through sound effect units. On this EP, he introduces the spectrum of three instruments – acoustic and electric violin and the rare Stroh violin -, giving „Weiß“ and „Weist“ a unique atmosphere. Finally, Tis rounds off the EP under his moniker Synthesis with a slimmed-down mix of „Weiß“, smouldering darkly in the deepest corners of the echo chamber.