[PGZBLUR008] MAUT - A God To Save My Soul Remixes | Progrezo 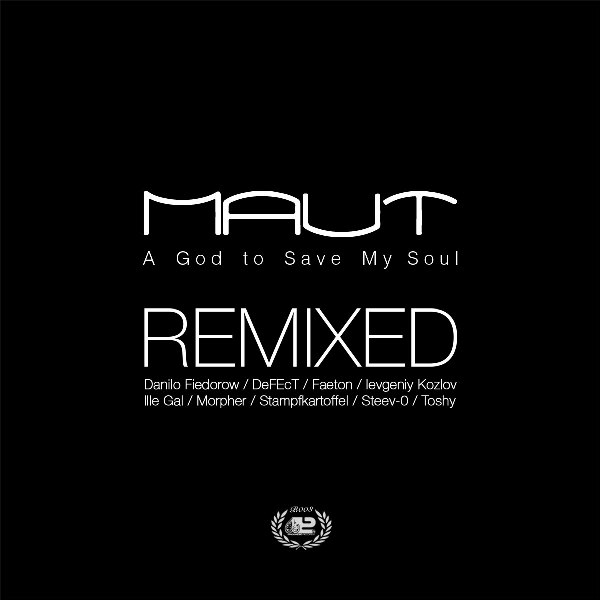 ★ Cutting-edge Electronica but Post-rock influenced Electronic Music Pearls at most !

MAUT is an experimental-progressive band from Ivano-Frankivsk, Ukraine. The band was originally formed in 2007 but movement to the current state of the band started around 2012.

Several singles were released in 2013, a new single in 2014 called DHT including an additional remix by Ievgeniy Kozlov and a tight list of remixers featuring own interpretations of MAUT’s A God To Save My Soul single.

Since 2012 MAUT are experimenting with their sound and their style varies from song to song. Variety of electronic sounds mixed with ambient vocals and harsh metal guitar riffs, alongside with interesting drum patterns overlaying groovy bass lines create a weird mix that you won’t find anywhere else. Guys don’t hesitate to play acoustics and can jump from pleasant and soft medleys to psychedelic and heart-ripping broken patterns within one song. Progression is their belief and Experiment is their religion. So if you get a chance go to their gig and experience all of this yourself. By the way guys perform a great show involving some weird costumes and behaviour of the band’s members.

Remixes come on a different basis, opening the list with such an electronica interpretation from Ievgeniy Kozlov that remind us some of Depeche Mode’s Exciter album spirit at most. Guitar riffs, mystic synths, evolving bass-lines and subtle kick-drums are part of a sublime music journey to highlight. New within the Progrezo’s family, Polish Danilo Fiedorow brings an emotional Electronica-rock version built over sequenced synth-lines and dirty bass shoots layered by the original guitar bringing together a well crafted remix piece for rockers. Ukrainian Toshy delivers a sweet deep-house version with kind of techy influenced beat built over a moderate tempo to make tension to the mix. Long pads and a quite good voice treatment bring with a solid but dynamic tool in the night. Third on the list is another talent from Ukraine as Faeton is, featuring a more funky-house interpretation with well crafted atmospheres suitable on any kind of room and music journey.

Coming from The Netherlands, Morpher brings a driven industrial-techno version inspired by the original voice but adding strength to the mix with percussive elements over a trippy rhythm and a mad bass-line to make difference in the package. Next on the list is Chuck Moe, taking us through a noisy atmosphere over quite calm but solid beats – strong guitar riffs layered with nasty bass-lines as undeniable cinematic soundscapes to enjoy. The list continues with Swedish Defect, who delivers a more moderate-tempo-rocker version, with kind of long instrumental riffs as a solid progressive-rock band jam to suit the package with solid bullets that shine by their own.

Coming from Slovenia, Ille Gal brings a trippy rocker electronica interpretation inspired by the original voice but adding kind of magic and mysticism to the mix between every beat. Mental but always solid piece of remix, it takes us straight to a film dimension as a memorable masterpiece in the journey. Another new talent within the label family is the German Stampfkartoffel producer, who delivers an up-beat version built over wicked tech beats and a trippy sequenced synth-line to blow up your mind on the fly. It reminds us Underworld music spirit when 90s sound raised up. To close with a flourish, North American Steev-0 proves himself within the post-rock arena as a remarkable producer to put an eye on. His remix is solid as production, taking us to a new music dimension as Steev-0 knows how.

Grab your copy as exclusive pre-release on:
https://pro.beatport.com/release/a-god-to-save-my-soul-remixed/1407861

You can stream to MAUT´s A God To Save My Soul Remixes on the Progrezo Records Youtube Channel:

MAUT - A God to Save My Soul (Ievgeniy Kozlov Remix)
https://www.youtube.com/watch?v=apd9rE8P5Ws&list=UUCi7CvP48jbrp9z0wN8Lk6w

MAUT - A God to Save My Soul (Danilo Fiedorow Remix)
https://www.youtube.com/watch?v=gFjitnyM7vk&list=UUCi7CvP48jbrp9z0wN8Lk6w