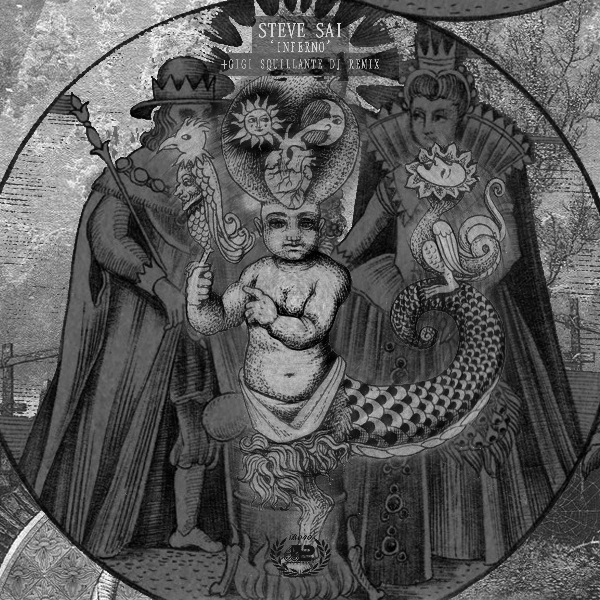 Progrezo Records proudly presents two outstanding DJ and producer within the label’s family as Steve Sai and Gigi Squillante, who are debuting on Progrezo with their new studio pearl unveiling magic skills as Inferno proves.

What really stands out from Steve's sets are the smooth and hypnotising sequencing as well as his stellar track selection reflecting the more than 15 years of experience in the industry. Originally from Athens, Steve entered the underground music scene on its rise in the mid 90's and since his first appearance in 96, he played in almost every acclaimed dance floor in Greece, both as headliner or support Dj and alongside of Max Cooper, Minilogue, Miguel Bastida, D-Nox,The Hacker, Siopis, Atmos, Dave Seaman, Moshic, Mark Broom and Matthew Hoag among others.

His innovative, yet mind-blowing set at Love Parade in Berlin 2006 for the Ntrop Recordings - Cavo Paradiso Float, set him up as a respected and promising artist on the demanding world of techno and after two years of studying electronic music production, in 2007 he started to produce music with different projects and therefore styles. His latest personal sound signature can be described as a kind of Deep Tech with dirty bass lines and fat synths as main components and on top of all that, he has also been closely involved as representing DJ, Producer, AR and Manager of well established local & worldwide labels and agencies such as Bonzai Progressive, Friday Lights Exclusive, Suffused Music, What Happens, Baboon Recordings, B2B Records,Rhythmetic Records, Reset Project Athens, Sabotage & more.

On the other hand is Gigi Squillante, born and raised in a small town in the south of Italy. He's more than a Dj. Gigi Squillante is dj and producer, art director, radio speaker, vj...He is a creative artist always in search of new dimensions in order to transmit emotions. His sound has continuously evolved during his dj career.

His career starts in 1983, among the long playing and the EPs of famous bands like Temptation, kool and gang, kc & sunshine band, and the magic voices of Donna Summer, Barry White, Stevie Wonder and Diana Ross.In the aftermath the house-music phenomenon explodes, and this is the most suitable dimension for a dj whose aim is to excite his audience and personalise his own dj-sets. Thanks to his eclectic vision of music his fame rises. In 1995 he joins the Match Music Television, a TV show about underground music and clubbing from all over the world, and just inside the space "The sound of the underground" he meets and interviews all the fathers of house music, later become Italian and international top Djs.

In 30 years he plays in many Italian and international clubs and as a dj producer realises tracks to important labels like Sutune, The Dub and Bonzai Records. In 2006 he founds with his brother - DJ producer Nae-tago - Anagogy Records, a progressive-techno-house independent label. For years he works in the "SOMUCH area" of the DOLCEVITA discotheque, set in Salerno and considered one of the top clubs in Europe. Here he shares his console with a lot of international top Djs. Raised in the midst of the disco music and shaped in the house music explosion we can consider the "electricity of sound" as Gigi Squillante's mainstay. Gigi Squillante is a dj transverse to music and to himself. Every set has its own personality.

There’s no need too much more to say about these artists, but something to assure is that their new single Inferno is a must-have massive deep-techno pearl, full of trippy soundscapes built over well crafted techno beats and evolving bass-shoots to blow up minds on the fly and make quality tension to the mix. Sick voices layer the journey surrounded by kind of magic synth-lines to get a proper break-time and stand up worldwide crowds.

On the flip side is Gigi Squillante interpretation, taking us to an absolutely sick intro journey inspired by the original voice, mystic pads and a well crafted industrial beat that seems taken from a mythological odyssey at most.

Hypnotic techno beats surrounded by mad voice shoots and some original stems, drive the train to a trippy atmosphere proving Gigi Squillante himself as a notorious artist within the first-class underground electronic music arena.

Grab your copy as exclusive Pre-Release on:
https://pro.beatport.com/release/inferno-incl-gigi-squillante-dj-remix/1541540